DEATH TO THE WIZARD KINGS!

as recorded and depicted by MARIE ENGER. 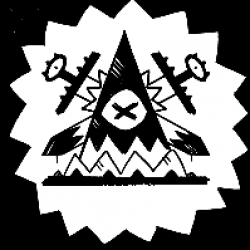 We probs should have minded...at least a *little* bit…? Maybe instead of spending generations forgetting how we had suffered at the magic hands of the Wizard Kings? ‘Cause while we were keeping our mouths shut and our eyes closed, Blot’Tor was teachin’ his crappy Wizard King frenemies how to siphon up our planet’s arcane core, ferment it in toxic geo-thermal vats AND IMBUE IT WITH LIFE.

They were out there making all sorts of weird little dudes (they called ‘em Vat-Spawn - ‘cause they were cooked up in vats instead of...instead of  bein’ born), havin’ fun, playin’ god with living creatures...Then they got a little bored. Then they started pickin’ fights. Then there was DRAMA. Then the very-public-breakup of the Wizard Kings, and after that? Bloodshed. None of us know who started it, none of us know how it’ll end, but what we DO know is…

The Wizard King Blot’Tor was the first of the Wizard Kings to reach into slag and rip consciousness to the surface. It was *his* abomination that started it all when they first staggered before their creator, fell to their knees, and broke into a thousand barbs…

Which Blot’Tor took up and stuck into the body of his *next* abomination...the one that put an end to it. 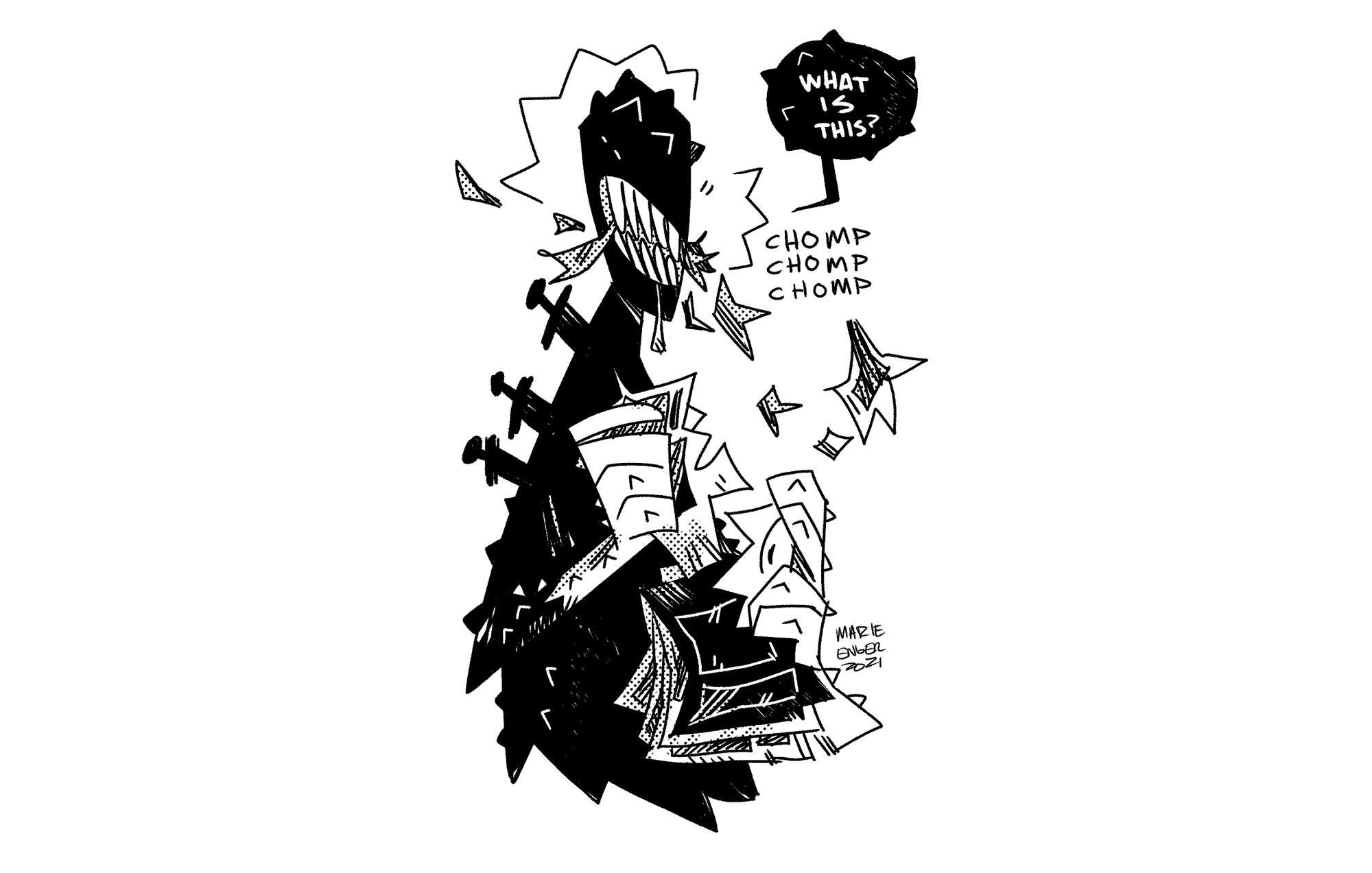 Pit Pit once stood at the top of the Bongcano, blindly guarding whatever lay within by slaughtering endless waves of oncoming attackers. Then, in the comic anthology DAGGER DAGGER, they gained WIZARD VISION and made their way down into the Pit, witnessing all the beauty and horror of the Bongcano. Then they made their way up to the top of the Wizard King Blot’Tor’s tower. Then they killed him.

Now they don’t...they don’t know what they’re gonna do. What’s goin’ on?

But that was BEFORE I was trying to convince people to donate money to me so I could take the time I WANTED to draw this thing that I really, really love, instead of not even getting to take the time I needed.

Unlike Pit Pit, I know what comes next and I desperately wanna draw it, and then I wanna share it. Throw some digital dollars in the donation pit if you wanna, save ‘em if you can’t. Either way, check this out, look, look, look, dude… 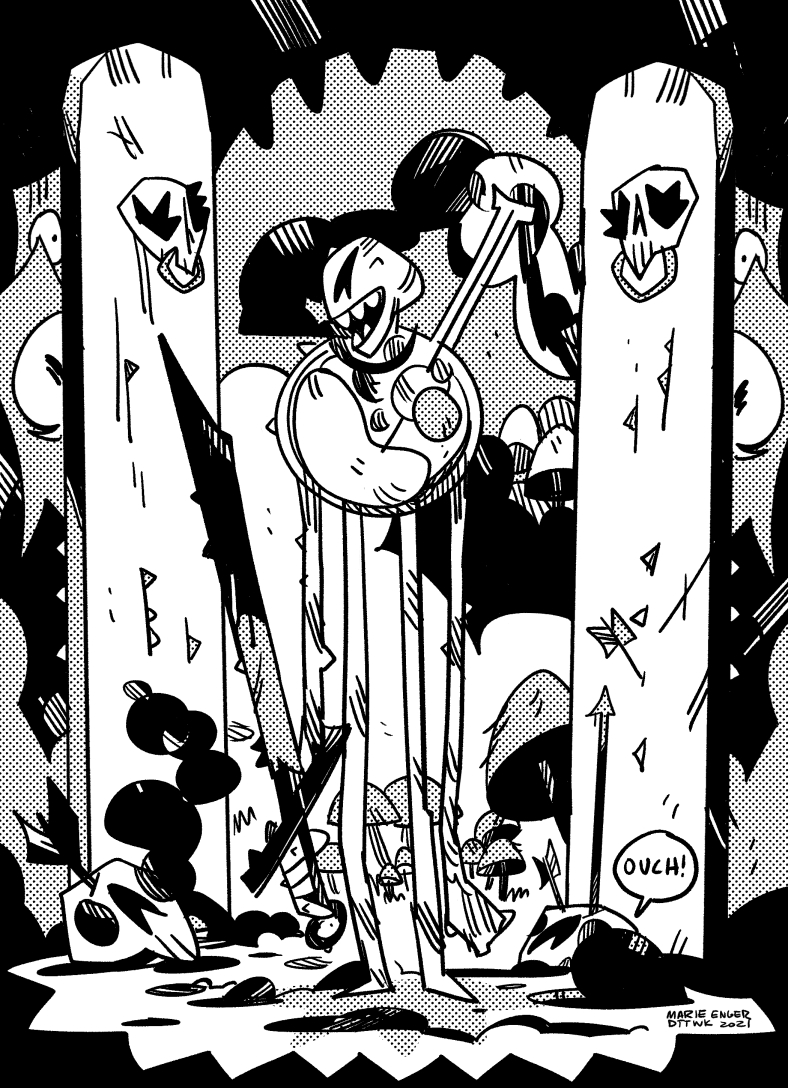 Last year, when DAGGER DAGGER was kickstarting, one of the reward tiers was some custom DTTWK art from me, and this was the week where I said "fuck you" to the unforgiving schedule and made time to work on something I love.

Name subject to change but, until then:

A 7ft tall steel 'n lime slime Spoon Vaporizor, this Vat Spawn was rolled up by Acolyte Lvl 4 - RICO. They have been stationed at the Western Mush Gate specifically 'cause they just have that little SOMETHIN' that mellows the Mushroom Tenders. PLUS they can stretch their limbs into all the hard-to-reach spaces and clear them spooky spiders out.

Each Vat Spawn comes with 4 awesome abilities, and Scheduling Pit ain't any diff! Here's what they got goin' on: 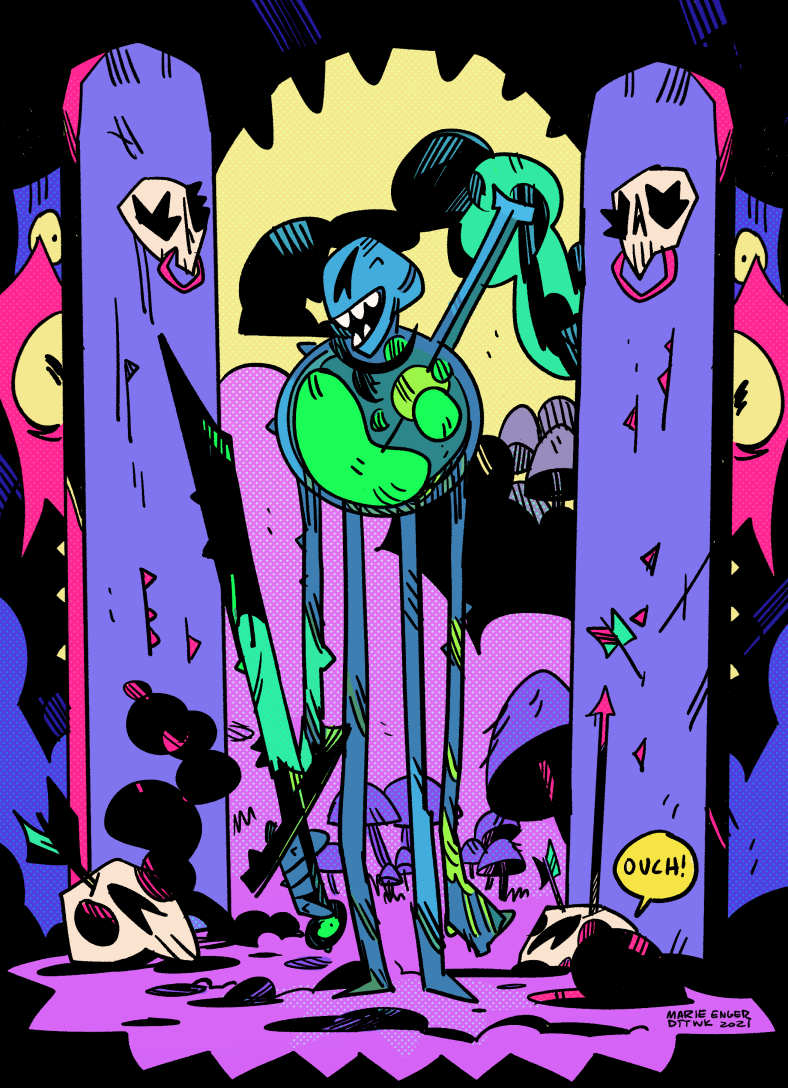 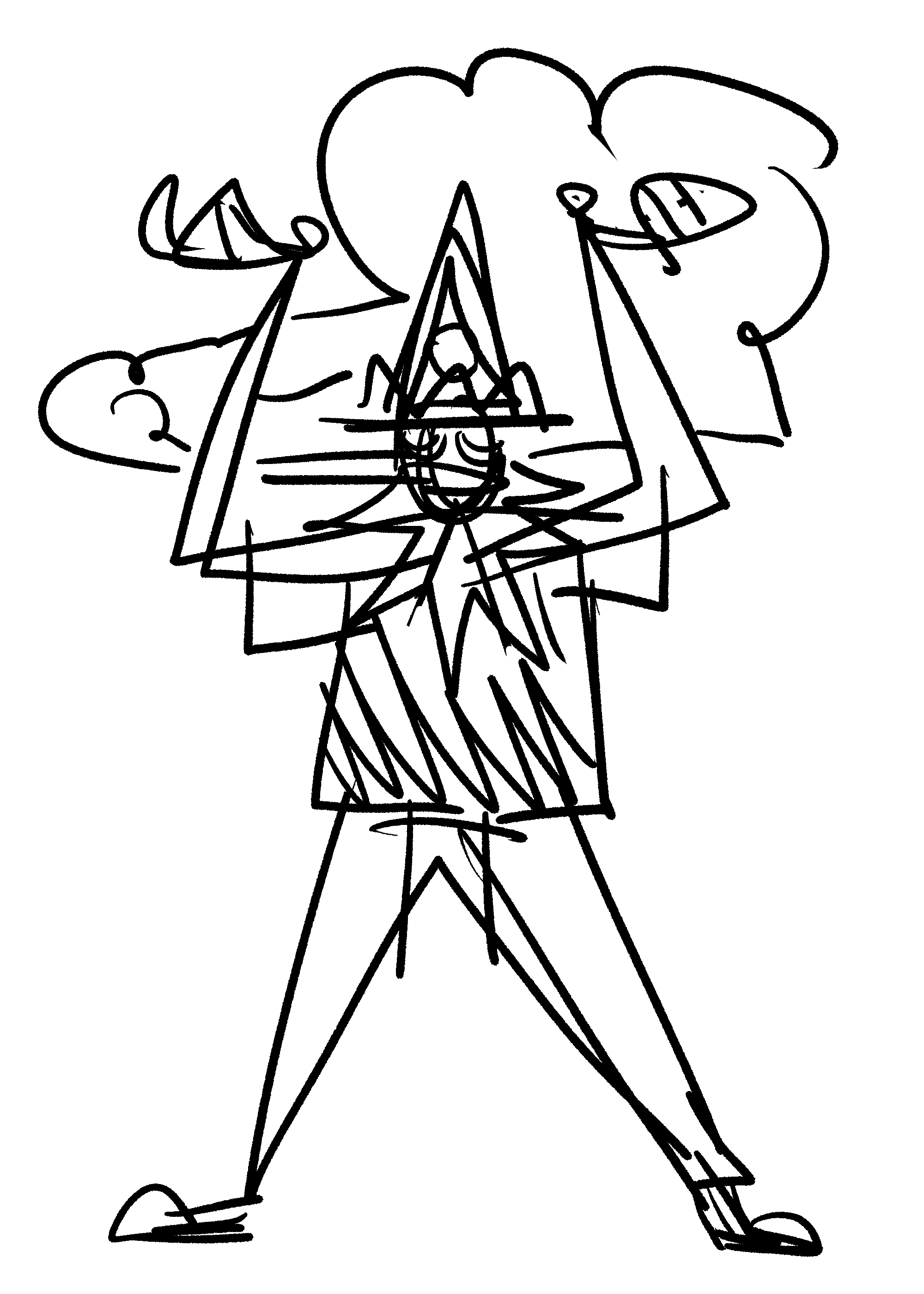 Usually hate letting folks take a peek behind the sketchbook curtain, but NOT YOU.

I'm real sorry there's not been too much new stuff. Like I said - the UNFORGIVING SCHEDULE. 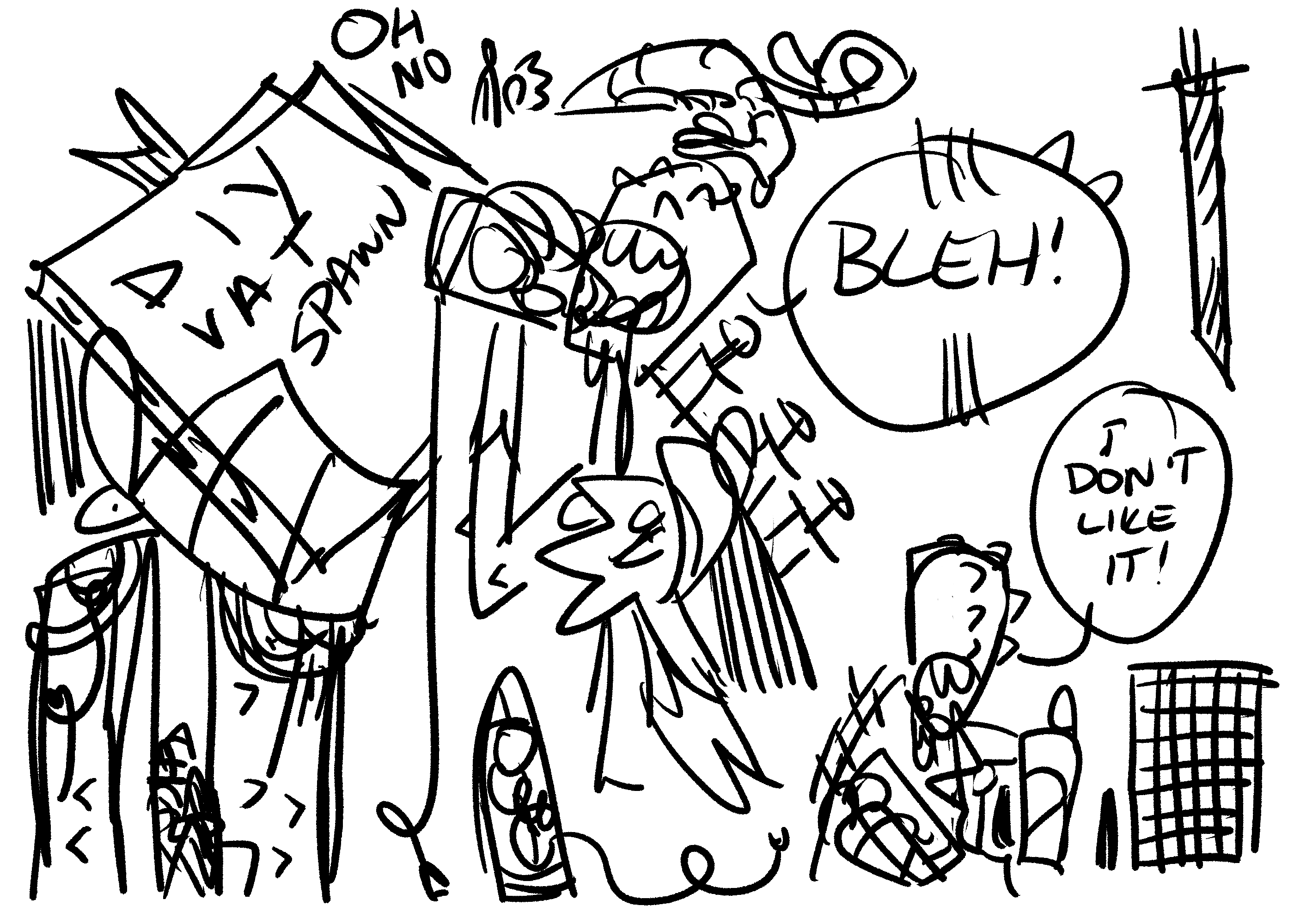 My schedule has been really unforgiving lately.

Thanks for helping me make time to work on DTTWK. I PROMISE these scribbles will make sense really soon. 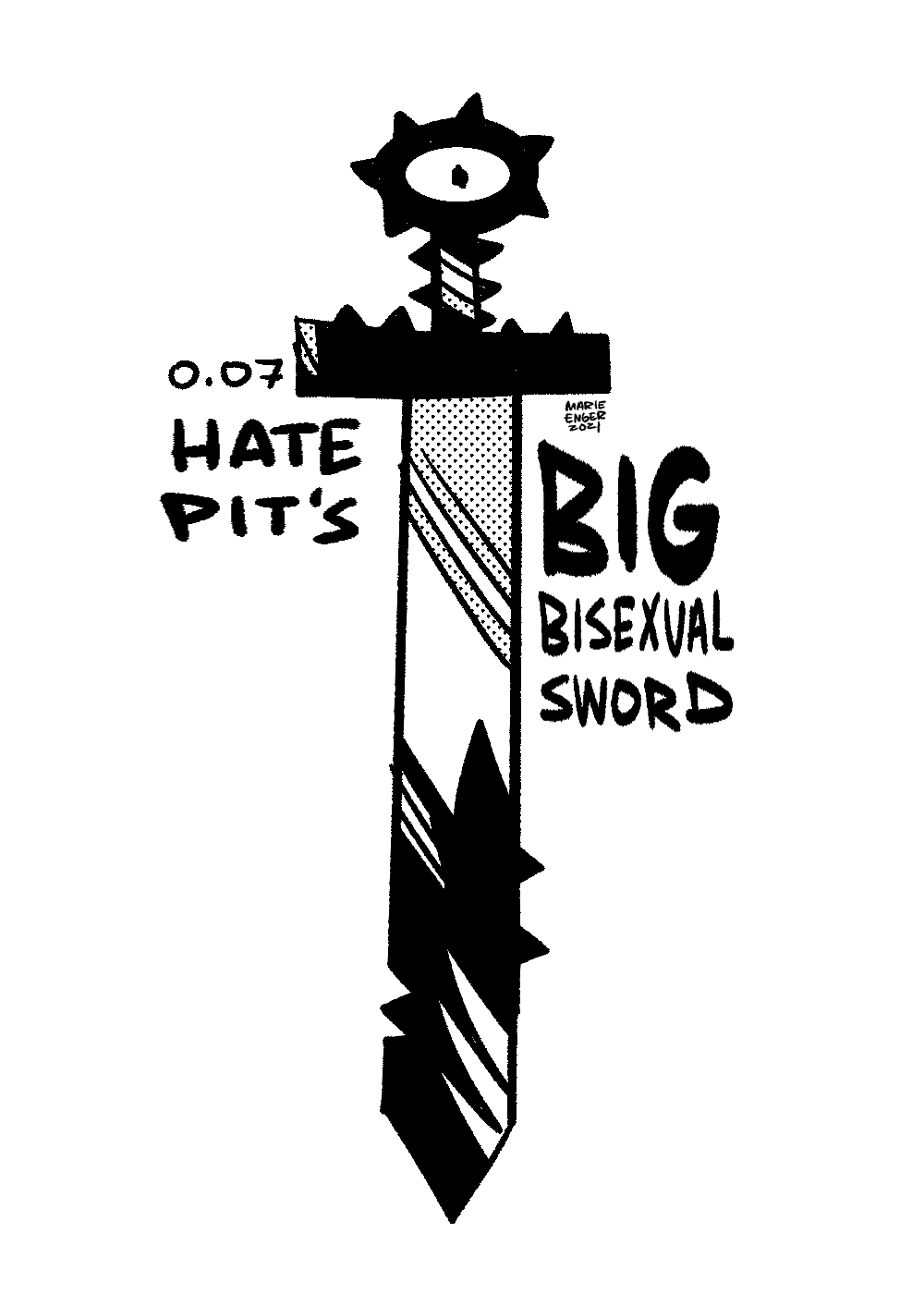 Look: this sword looks AWESOME and even though you may THINK it’s black and white, it is in fact, the stunning colors of the Bisexual pride flag. Woo hoo! Yes! 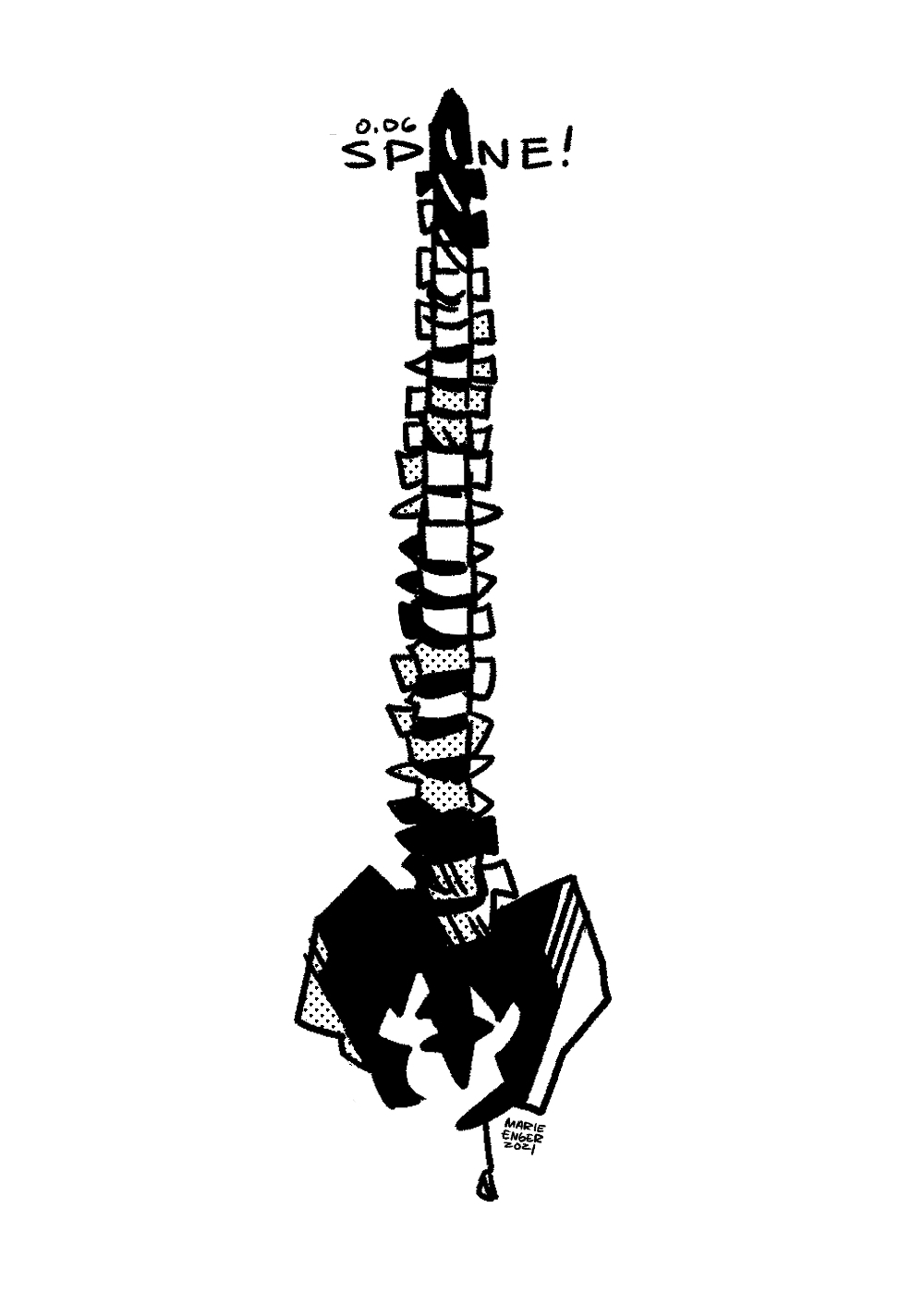 Damage: 33D4 divided equally amongst ALL opponents. Even the INVISIBLE or UNDEAD. 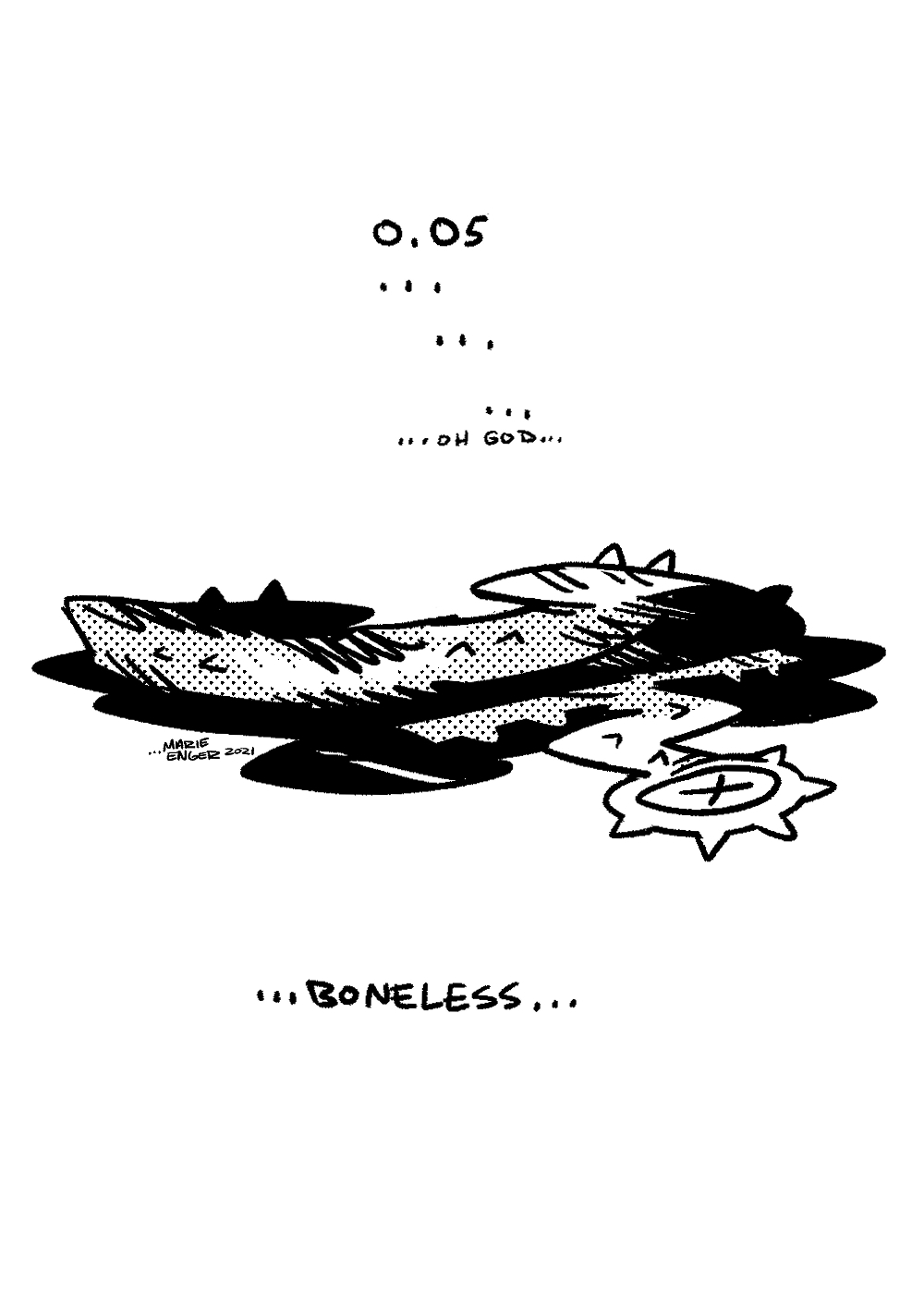 Reach: I refuse to touch it.

Damage: 1D12 and now your opponent is covered in slime, please can I leave?

Weight: WHO KNOWS! NOT ME! I WON’T TOUCH IT.

Cost: Whatever you want, just get RID OF IT.

Look: if you bring up this thing again, I’m leaving. I swear, I’ll do it. I’ll just GO.

Feel free to take up this sword against whatever enemies you face in whatever system you're playin' in. DTTWK, and all but like...for real? This is DISGUSTING. STRAIGHT. UP. NAST. 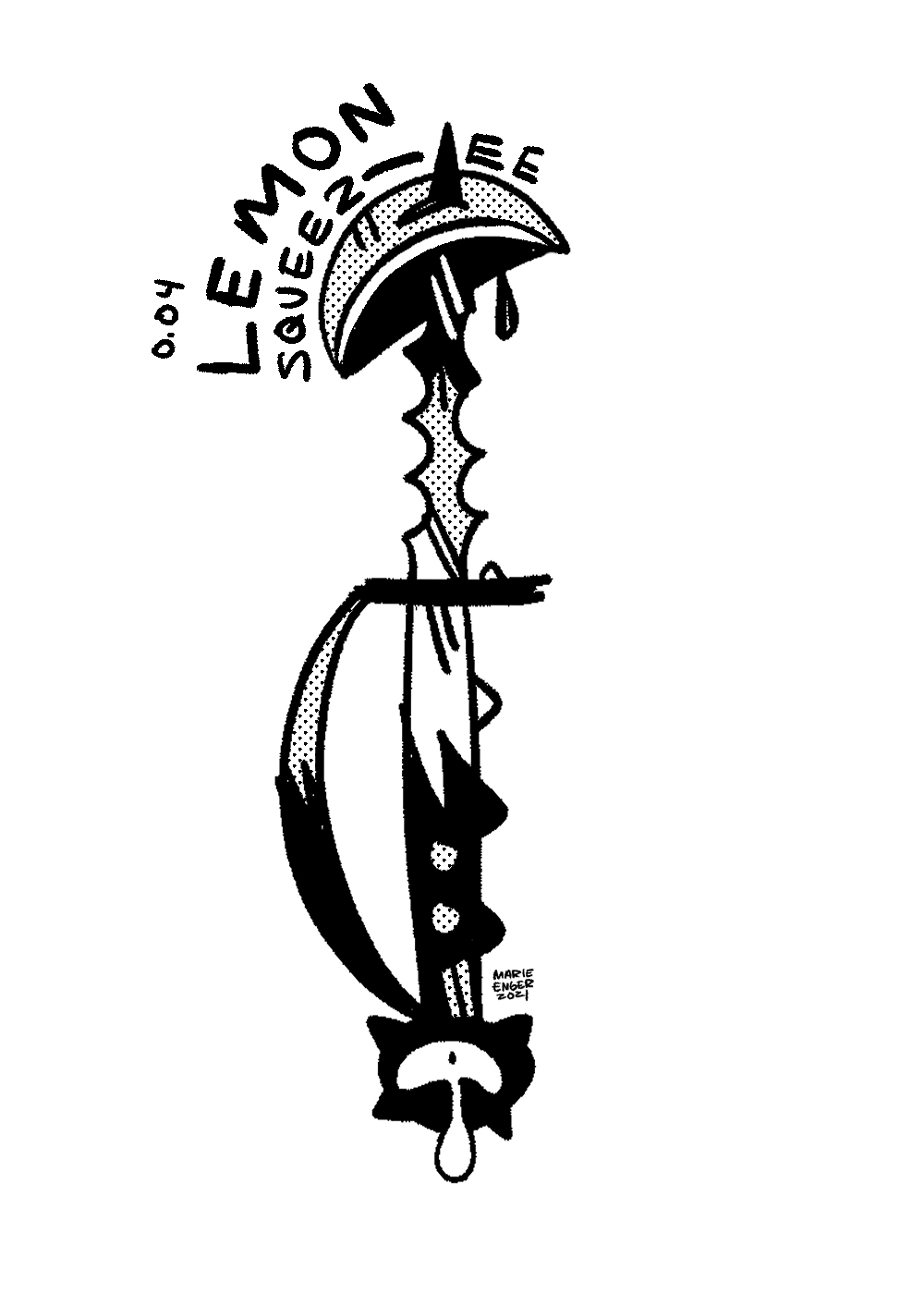 Reach: 6 inches + lemon size less one inch ‘cause like, you gotta make sure that lemon stays on.

Range: Depends on the size of the lemon

Damage Type: DIRTY, with a twist of… lemon.

Weight: 6oz+weight of the lemon

Cost: ONE simple table knife, at least ONE theieved lemon, and your humanity (if you’re human). 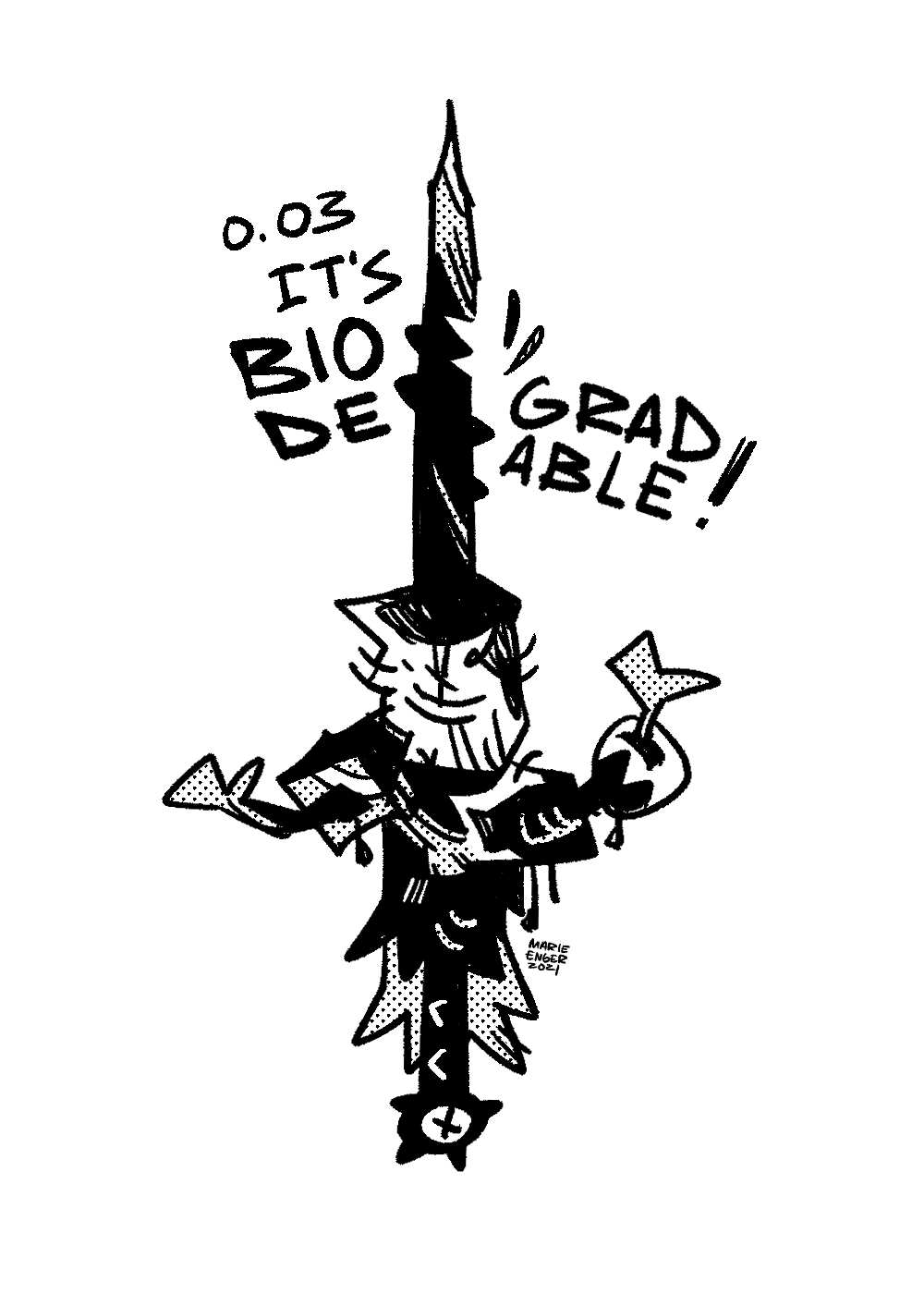 Damage: 1d10 and now everyone’s gotta make a constitution save against the smell. You know the one...

Look: It’s made out of 100% recycled materials! 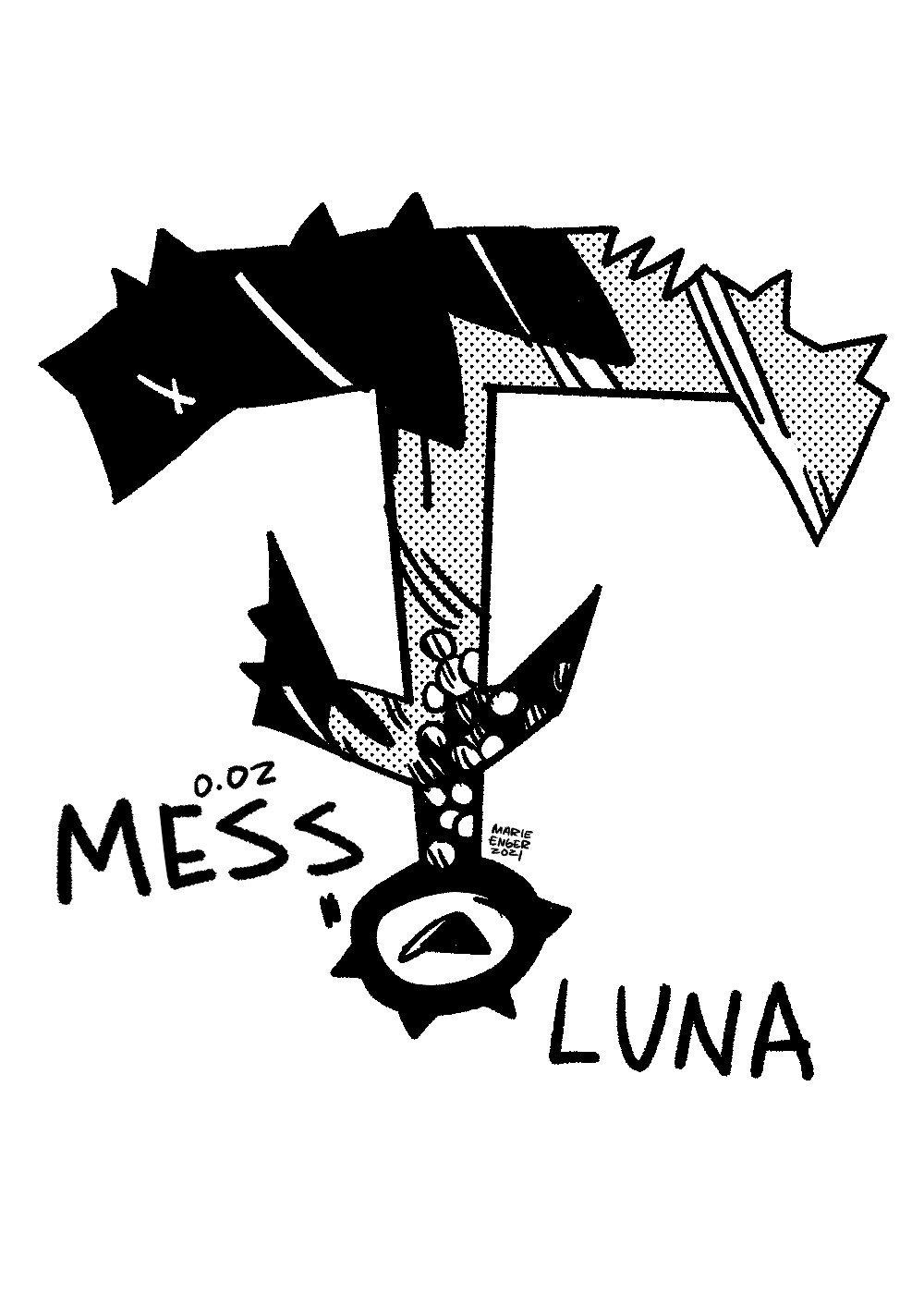 Damage: 1d6+ 1. Now your opponent smells like, good enough to eat almost? So all future attacks against THAT opponent now get +2 on the attack roll AND damage roll. Y U M.

Damage Type: PIERCING if you only use it once, chopping if you mean business.

Cost: This here is a TOOL OF THE TRADE. You can’t simply BUY a Mess ‘O Luna, you EARN it by making a mess out of some Wizard King in a kitchen somewhere.

Look: You’re gonna be better with tools you KNOW vs. tools you don’t! Sure, in the past something like this would be used to chop herbs up for some Wizard King’s dinner (or mind woaaaaah), but YOU have made this little doohickey your own by making just...a giant Mess ‘o Luna. Good for you. Death to the Wizard Kings! 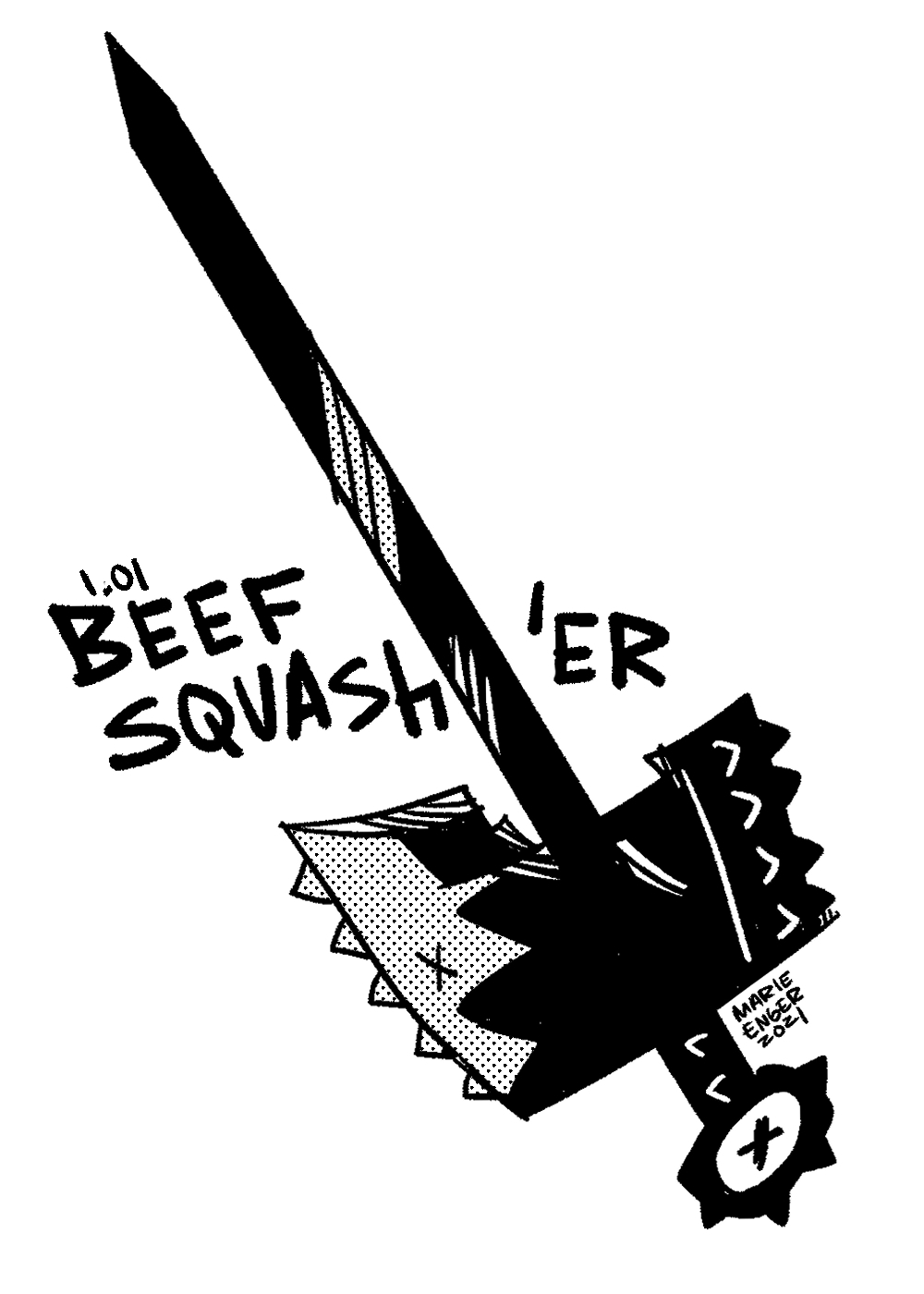 Damage: 1d8 + 2 for every unsettled beef you’re willin’ to air out in front of the party. Go on, make it juicy.

Cost: Nothin’ - except everyone now thinks you’re a petty gossip and knows you got UNSETTLED BEEF.

Look: You have got some UNSETTLED BEEF that CANNOT be squashed by words alone anymore. But like, everyone DESPERATELY wants to know about it, and they’re willing to look past the fact that you’re for real squashing your beefs, like literally, in a violent sort of way, to learn about ALL! THOSE! JUICY! DEETS! Oh my gooood... 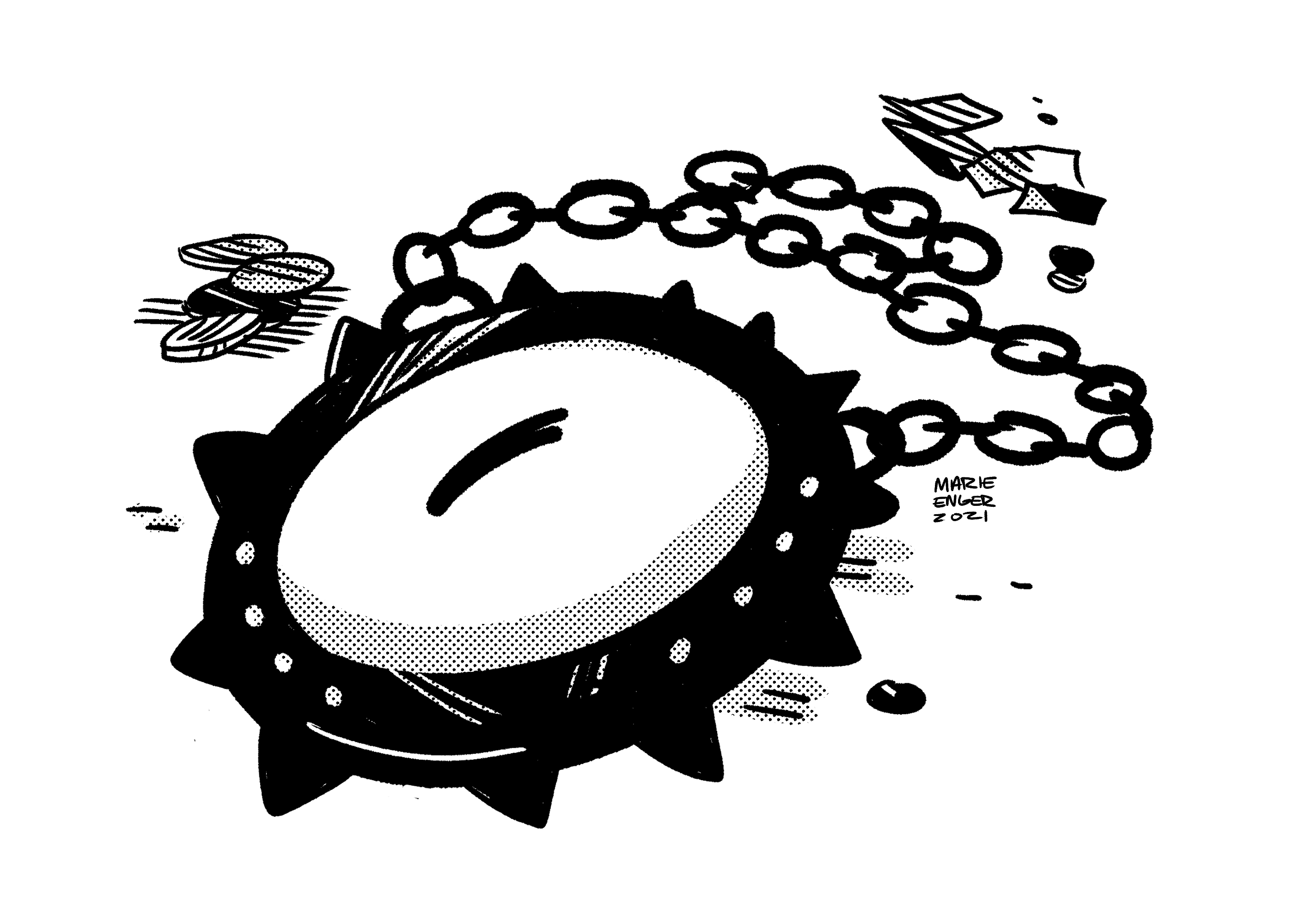 So, this isn’t a cheap knock-off - you can TOTALLY tell ‘cause this WIZARD AMULET has little brackets in it and it ain’t made out of acrylic. No idea what color the eyeball is ‘cause this illustration is in black and white.

If you pop this WIZARD AMULET on, you’ll be able to see invisible creatures, objects, ghosts AND the color out of space. But only through this wizard amulet. Your regular eyes still see all the same shit they’ve been seein’. 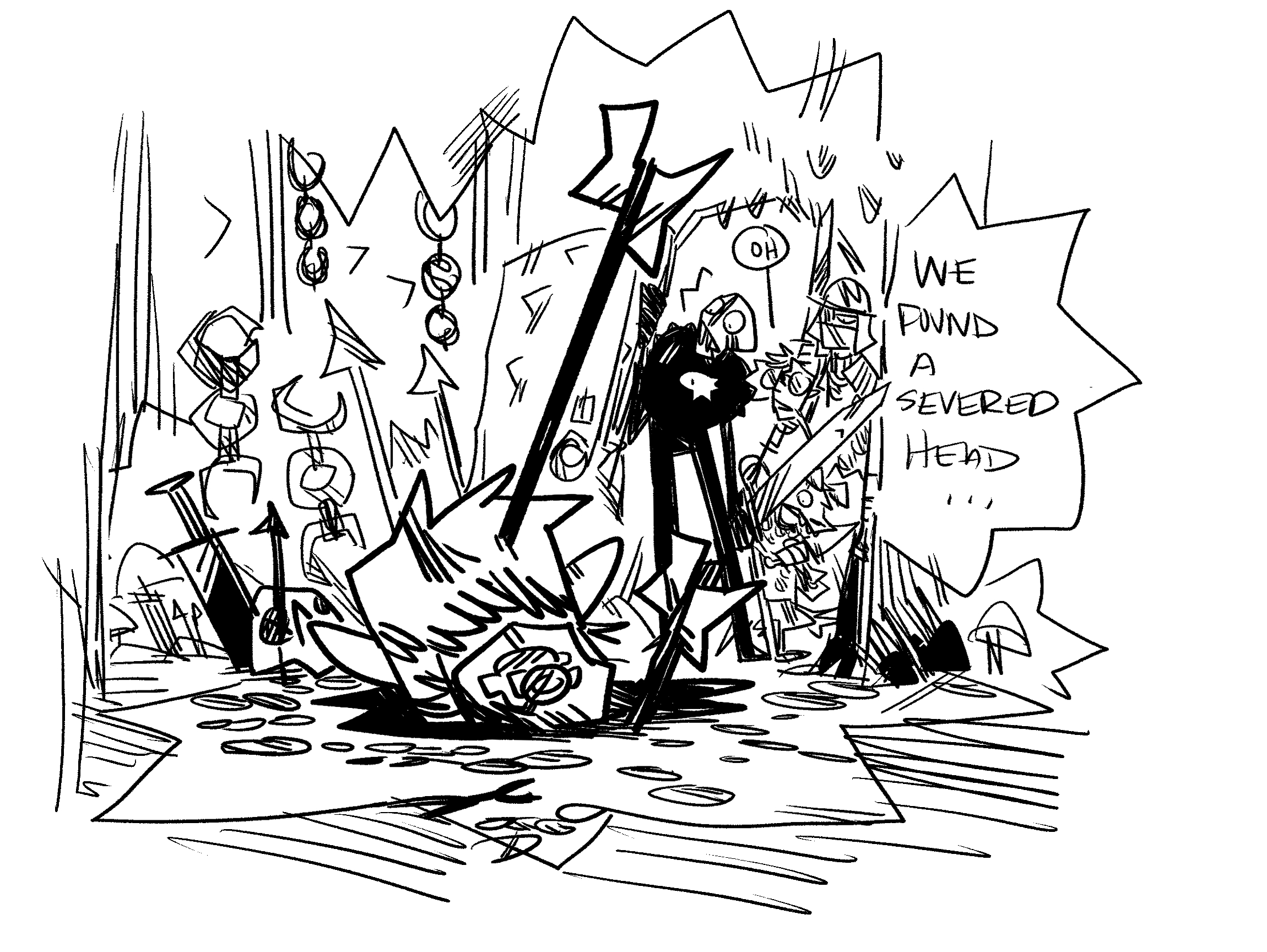 But it ain’t a Wizard King’s. BUMMER!

Though Death To The Wizard Kings chronicles the trials and tribulations of the Pit Uprising through comics, supplemental TTRPG material, and illustrations, sometimes it will also feature quick depictions from Orm, the Complex, the Container, and several other in-game locations. This here? This is the complex. And Hate Pit, PakPak (dog-style kobold), Crannoc (the human) and Abraxis (the mutant in that cool armor waaay in the back) found a random severed head behind the door.

Orm is the current location of HATE PIT and GLOW PIT. It is a collaborative game run by the talented artist, author, game creator and game master Nick Kuntz. In 2020 it offered a reprieve and community, just like it does today. There wouldn’t be a Death To the Wizard Kings without Nick’s worldbuilding, on and offline. 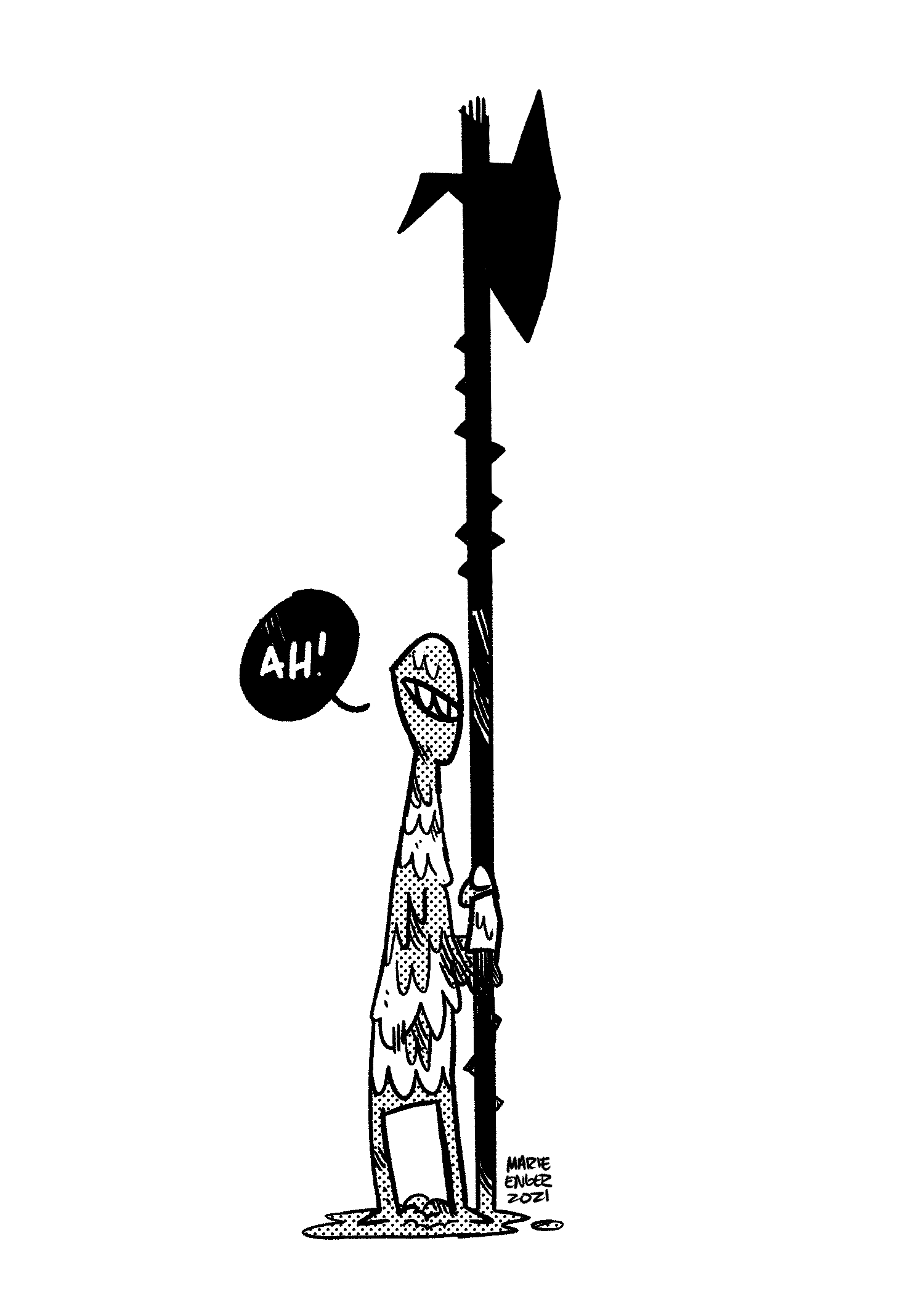 Oh hey, it's a 3ft oozer battie. One day I'll show you how to make one of these little dudes. Promise. 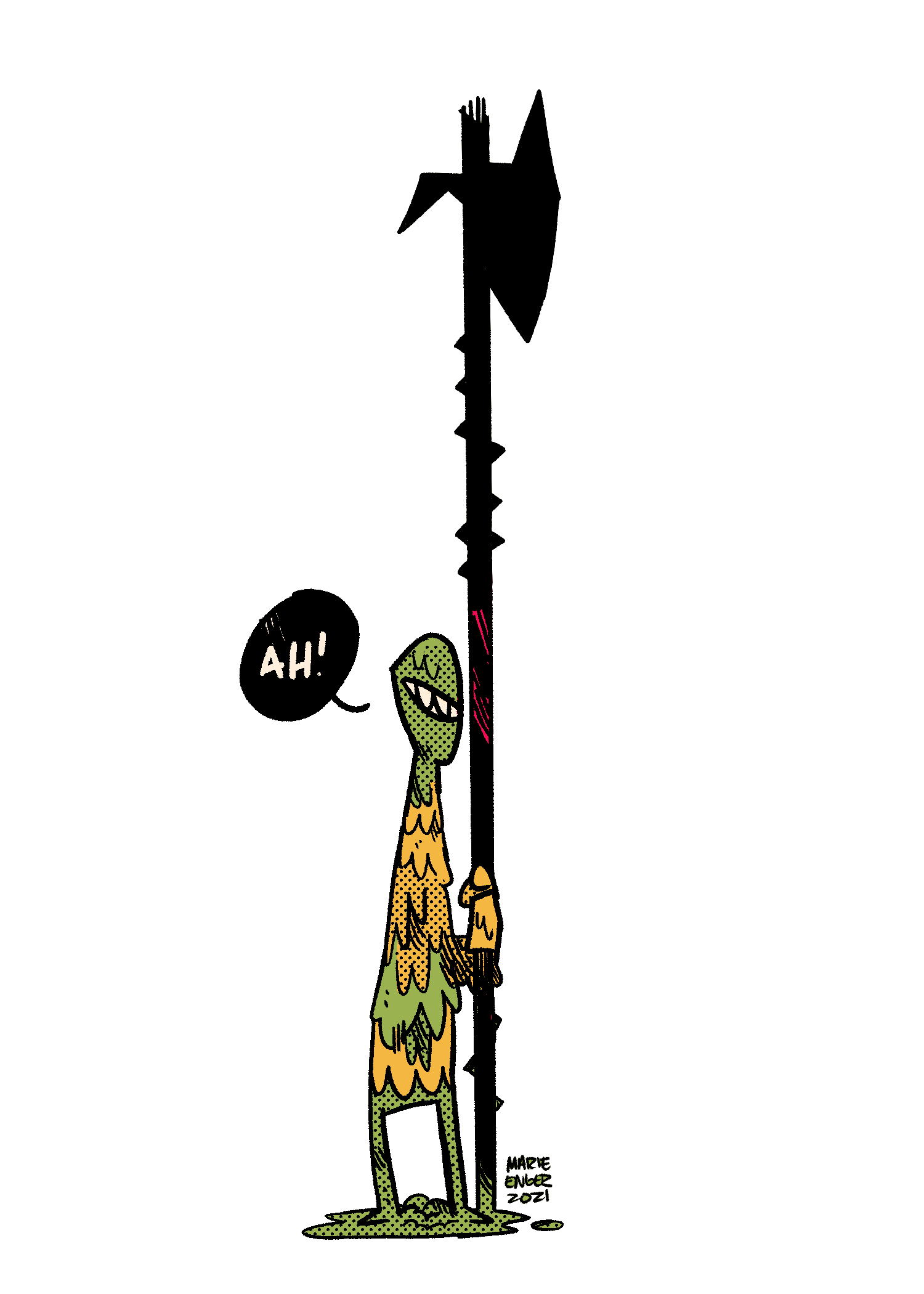 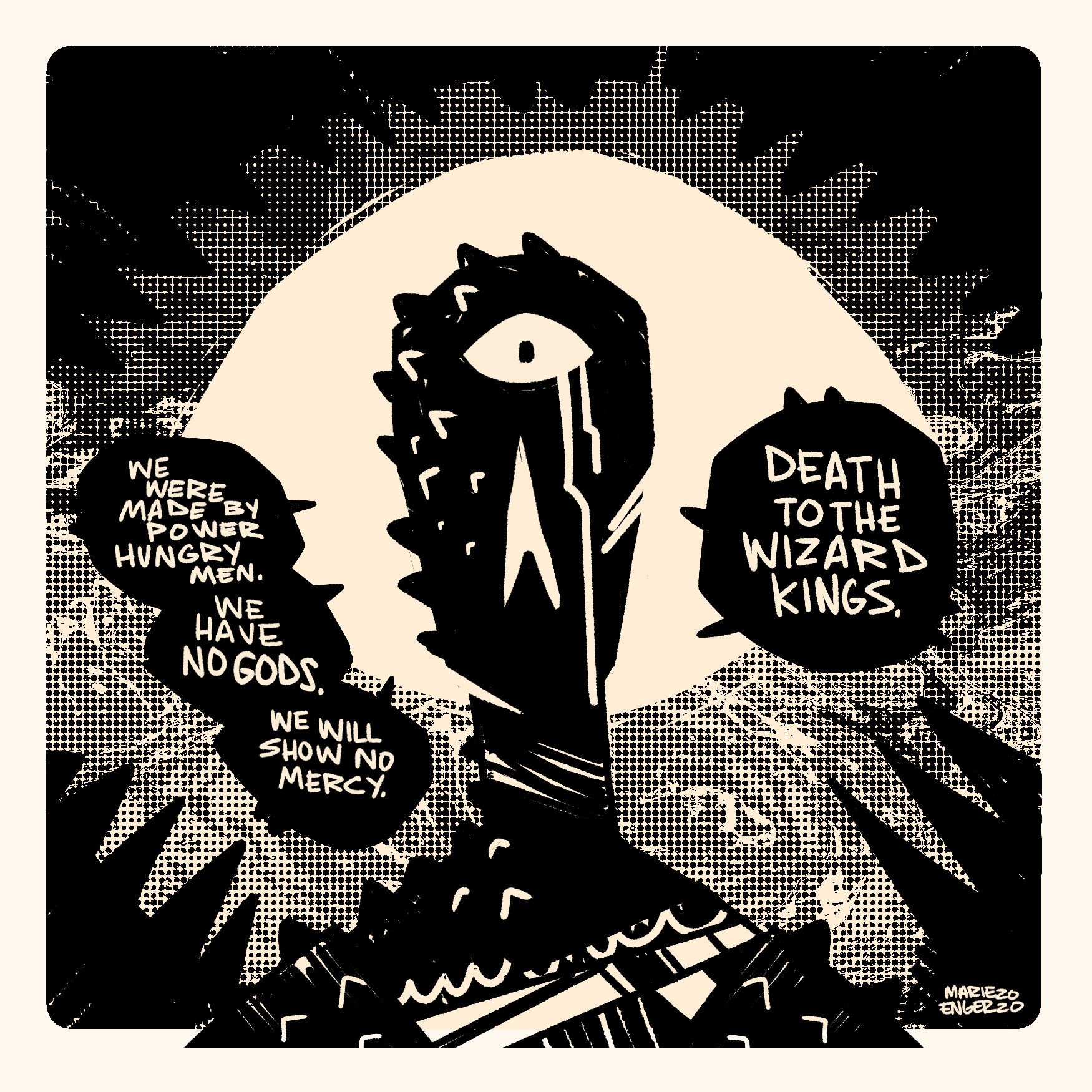 This was the first ever drawing I did of Pit Pit, the first Vat Spawn to graft a wizard’s eye to their body, witness the horrors of what the Wizard Kings wrought, and say “NOPE.” and then they said

DEATH TO THE WIZARD KINGS. 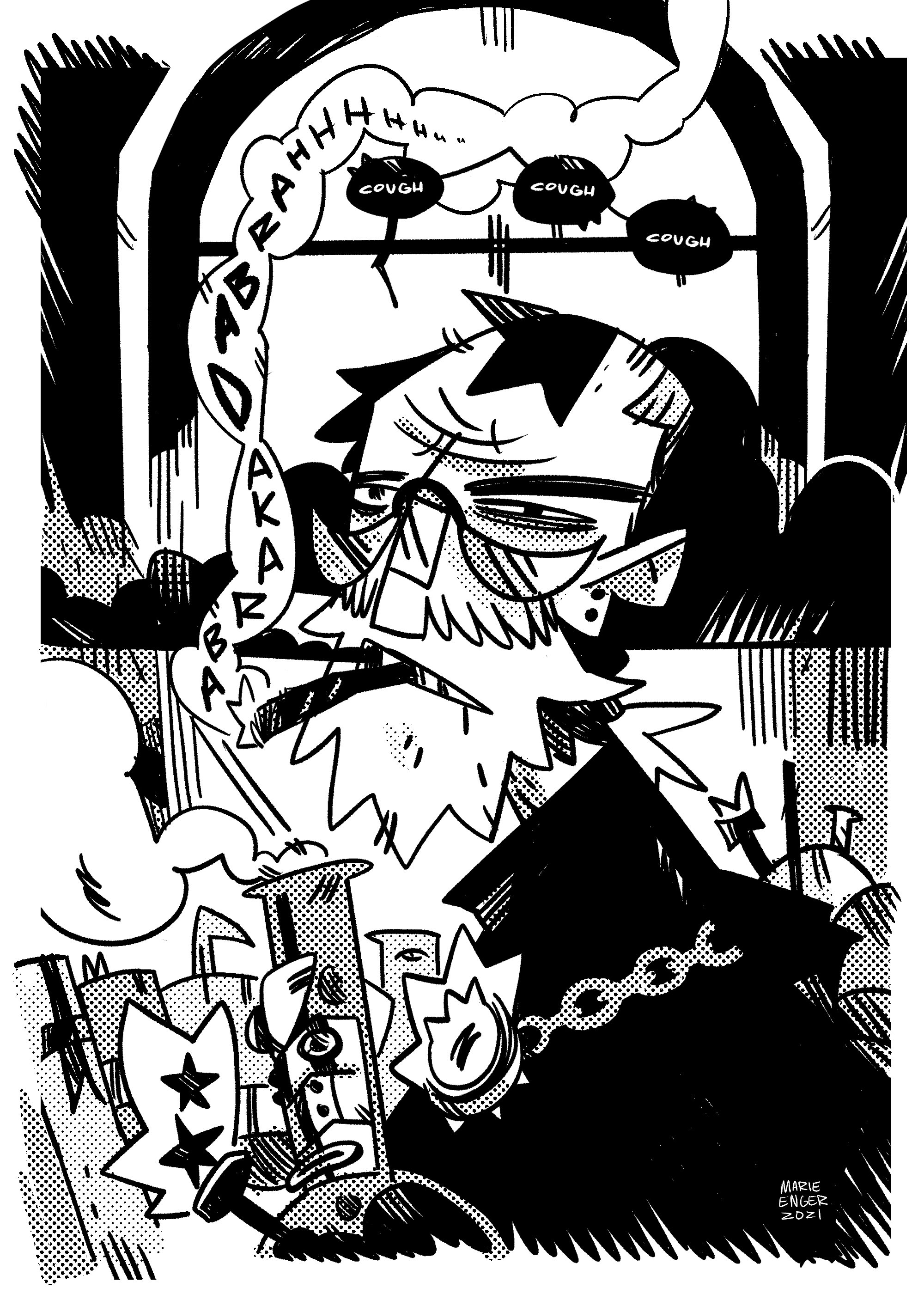 He was the first Wizard King to bring “life” to the Vat Spawn.

Then Pit Pit killed him.

Death To the Wizard Kings!