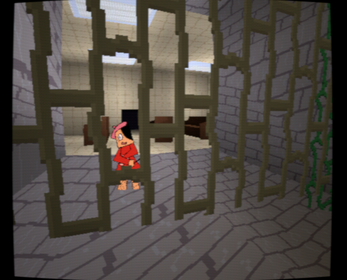 I made this game for Haunted PS1's "Madvent Calendar 2020" a Game-a-day anthology for the days in December leading up to Christmas.
It was a short game about exploring a lonely underground city that has some dark secrets. There are a few NPCs to talk to, a few secrets to find, and an abrupt ending. And additional endings if you figure out how to find them.

It was short and bizarre to those who played through it typically, but maybe a little bit more meaningful to those who searched deeper.
I like these two comments on the game's page to demonstrate the range of feelings people got from it: 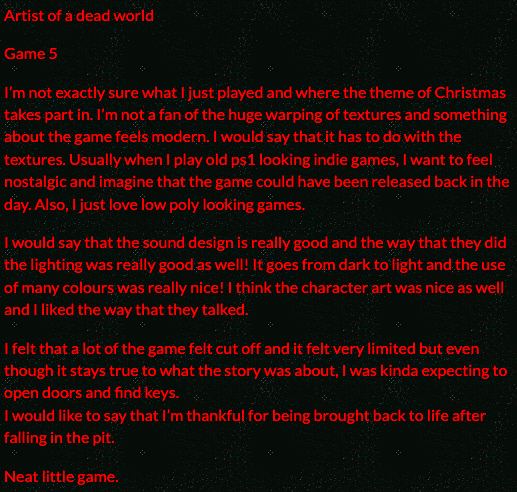 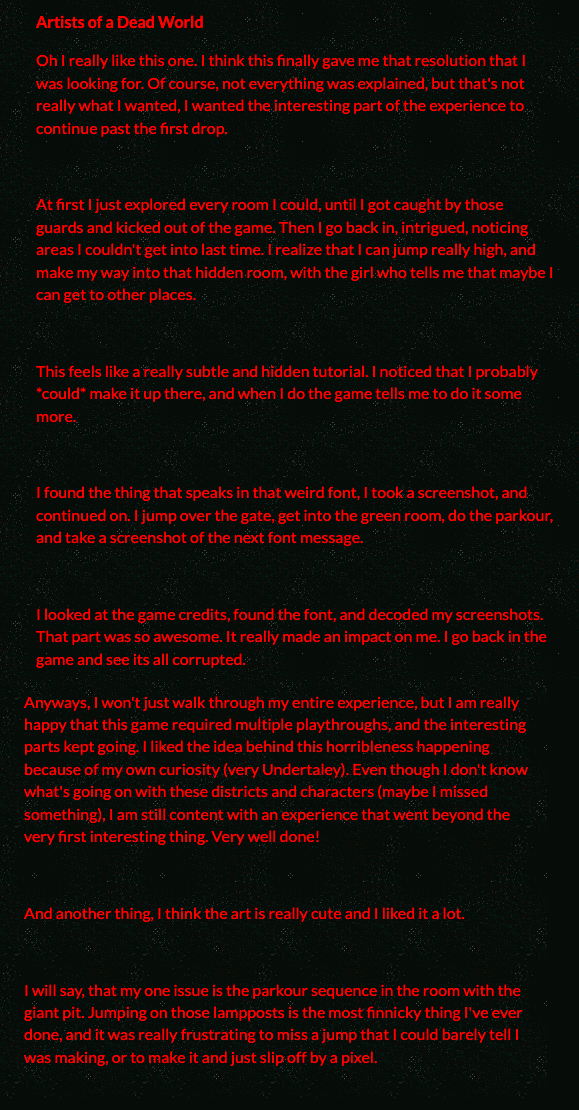 See, one person played through it and thought "huh, neat". While another person dediced to dig deeper and was rewarded for that. I'm not saying that the person who played it surface level played it wrong or anything, I'm just proud to have made something that unfolds and becomes something more if you dig deeper.

I noticed that in replies to that comment, there were a few people asking about secrets and wanting hints, and people giving pointers. I really love to see that! I don't know if I'd call it a "design philosophy" but I love to add lots of weird and cryptic secrets to games. Why? Well, when you make games with a very small audience, that means there's less people to go in and datamine everything out at once and find all the secrets that way. It instead is in the hands of the few players to discuss amongst themselves the various secrets and tips and tricks. That communication of shared discoveries is something magical to me, maybe harkens back to a time when all content in popular games wasn't already dumped and mined for all secrets, and you had to go on fourms and discuss findings and rumors. There's a sense of mystery, discovery, and comradery in discussions like these, I think.

- So, what was the deal with this game?

This game's setting and characters were in fact inspired by a much older project I worked on with a friend. It was a very, very big modded Minecraft world, actually. It was around when Portal 2 came out, and we made a world and started making our own Minecraft parodies based on it. We kind of grew attached to this world we had made and just kept adding more, and eventually made a modpack for it, and it just kept getting bigger and bigger with characters and lore until eventually, besides very obvious parody moments, it was pretty genuinely its own thing. There were chapters that followed different protagonists during different moments in the facility's history, there was lore and time travel and aliens and a lot of jokes we were pretty dang proud of that never got to see the light of an audience.

The third and final chapter of this world focused on this underground city. The lore is that all the people living there are descendents of test subjects in the facility who woke up from cryogenetic storage one day, but found out that the outside world was a very dangerous place ravaged by strange matter known as "Greenity". Bright green goopy stuff that just kills you, dude. Just straight murders you dead and warps time and stuff. So people turned this giant underground facility into a city.

I'm quite sad we never got to make videos in this modded Minecraft world, and as of getting a new computer, the modpack can't even be launched anymore, so I have no clue if any of it is recoverable. There's mostly just a ton of screenshots left, but if ever got to explore it and tour it off again, I'm sure there would be a lot of memories that get unlocked, like "Oh, wow, there was a secret here!" or "We planned a joke here!" or "Yeah so this is where the secret society of time traveling janitors meet" or "This area is genuinely so pretty and we're dang proud of it.". So I feel really nice to have made a game vaguely based upon it, and frankly I'd love to revive more concepts we came up with for this for something else eventually.

- What happens to this world and the characters in it? Is it really dead?